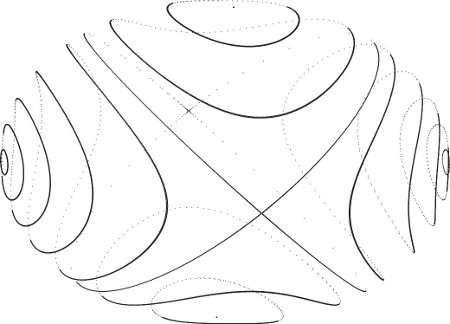 Figure 2.3: Trajectories of the components of the angular momentum vector on the principal axes, projected onto a plane. Each closed curve, except for the separatrix, is a different trajectory. All the trajectories shown here have the same energy

The state space for the motion of a rigid body is six-dimensional - the three Euler angles and their time derivatives. Noether’s theorem gives us four conserved quantities - the three components of angular momentum as well as energy. This means the motion only has two degrees of freedom. The numerical result above also shows that the three components of angular momentum trace one-dimensional paths.

The total angular momentum is also conserved as its components are conserved. That is,

Previously, we found expressions for angular momentum and kinetic energy as:

The deviations from principal axis rotation for the Earth are tiny: the angle between the angular momentum vector and the ĉ axis for the Earth is less than one arc-second.

The above-mentioned deviations could be caused by Earthquakes, tides etc. In fact almost every other planet, asteroid and moon rotates about its principal axis with the largest moment of inertia. There are some exceptions - notably comets - which has reactions caused by the volatile jets that affect their rotation as they get closer to the Sun.

Among the natural satellites, the only known exception is Saturn’s satellite Hyperion, which is tumbling chaotically. Hyperion is especially out of round and subject to strong gravitational torques from Saturn.